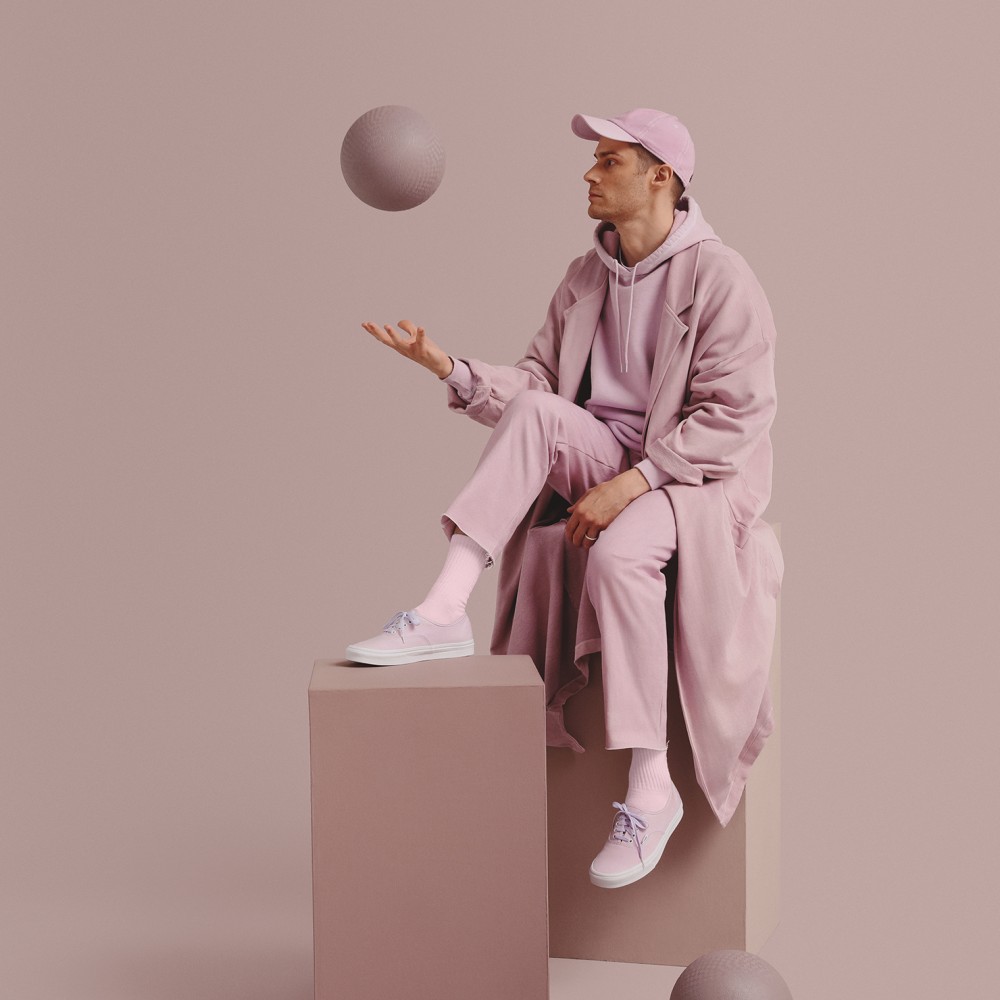 The melody-driven indie-electronica that RAC has made for 'BOY', his forthcoming third album, washes over you like faint memories. The songs are soft, light, warm, and comforting, as though revisiting old photo albums and recalling years gone by without any of the day-to-day struggles. It's at peace with the past, while lodged in the present. André Allen Anjos (aka RAC) is originally from Porto in Portugal. He's 35-years-old now, and has lived in Portland, Oregon for the ...

The melody-driven indie-electronica that RAC has made for 'BOY', his forthcoming third album, washes over you like faint memories. The songs are soft, light, warm, and comforting, as though revisiting old photo albums and recalling years gone by without any of the day-to-day struggles. It's at peace with the past, while lodged in the present. André Allen Anjos (aka RAC) is originally from Porto in Portugal. He's 35-years-old now, and has lived in Portland, Oregon for the past decade with his wife and cats. And even though it's more than two decades in the past, he's never reconciled with his own childhood. He's decided to do so now…

Three years ago, Anjos began to make 'BOY'. He had achieved so much in his career, between DJing, soundtrack work, and his own album releases. He felt more comfortable in his own skin, and in a place of security, to really delve into his formative years. “I didn't have a major concept, I just wanted to see what happened,” he says, of the longest record-making process he's ever committed to. He found himself more prolific than ever. “I was just writing and writing and writing. I wrote so many demos, and I kept coming back to this theme of childhood. So that's why I called it 'BOY'.”

Anjos had an unusual upbringing, and to date he has been uncomfortable to share it at all. He was raised overseas to parents who both worked as missionaries. His mother is American, and he always felt torn between worlds in terms of nationality, first language, even the concept of home itself. He struggles to distill it all in person, but the music he's made ruminating on it runs the gamut of emotions that comes up for him. “I didn't feel a part of any specific world, it was a bit alienating,” he recalls. Anjos was a worry to his family when he was younger because he didn't talk to adults until he was around eight-years-old. “I was confused about language,” he explains. He could speak, but he wasn't comfortable, so he didn't. “I didn't feel Portuguese, I didn't feel American. In the midst of that I found music and it became my voice,” he says.

When Anjos was a boy he learned how to play piano but he wasn't interested in theory. He gravitated towards finding his own patterns and creations. Since his parents were missionaries, he didn't have typical access to music and pop culture so he was almost forced to write his own, thereby filling that void. “Twinkle Twinkle Little Star wasn't interesting to me,” he laughs. “In hindsight I felt compelled to use it as an expressive tool, and that's what kept me coming back.” A few years later, his family relocated to Pennsylvania and Amish country for missionary work. Anjos got a guitar, and he'd rebel and download bands on Napster (Radiohead, Nirvana, Marilyn Manson etc), learning how to play along. He'd spend hours inspired by studying these songs, then writing his own. School was atypical, because he had to move around so much. He went to over a dozen institutions in total. Music truly was his steadfast companion.

'BOY' pulls from these nascent years; ones in which words weren't doing the talking, but more esoteric languages – little melodic phrases that would be stuck in his head, or plain pangs of the heart. Back in his youth, Anjos had to do it all from scratch with no knowledge of how to create. He was his own teacher and guide. He used basic equipment that he acquired in his early teens. As he wrote ideas for 'BOY' he unpicked that coming-of-age, again trying to unravel musical elements he was figuring out. He wrote fifty demos. Then he approached his collaborators for vocals and lyrics.

Given that for the longest time Anjos didn't know how to express himself, there's a comfort in being the vehicle by which others' speak. “It's conversational,” he says of his working style with the artists he features. “We find shared experiences and I give them space to tell their story through my lens.” For 'BOY', his choice vocalists include LA rocker Gothic Tropic, British soul singer Jamie Lidell, alt popstar St. Lucia, and upcoming singer LeyeT. They would reinterpret the ideas Anjos was trying to extrapolate and convey, stamping their own notions onto his melodies and rhythms. The shared experience allowed him to find some kind of serenity in his solitary upbringing. Here he is now, decades later, finding companions in a time gone by. Anjos style is to work pretty hands-off, allowing his creative partners freedom over lyrics and performance.

He was overcome by the hunger and passion his collaborators shared to produce their absolute best with him. It's made for his most compelling work to date. Take 'Stuck On You' featuring LA experimental troubadour Phil Good. It's a soulful minimal rumination on missing an old romance, incapable of moving on. 'MIA' is a flirtatious ode to an object of desire, featuring yacht rock guitars and the raspy vocals of Danny Dwyer. The upbeat summer-y 'Passion' with DJ act Louis The Child recalls old French Touch records, early Phoenix, AIR, etc. It's very relaxed but it's not rooted in particular influences. In fact, Anjos said he decided not to listen to music at all while making it. He committed to a form of aural celibacy. “Nostalgia is a powerful tool and I really wanted to explore it organically,” he says.

There's a lot of focus on texture and sound design that will resonate with musos on a deeper level, including Anjos' recording techniques and the type of equipment he used. All the instrumentations are from the '80s and '90s. “Even though I'm using a modern digital work flow, all the sources are rooted in that period,” he says. “The only way I can describe it is that there's this universal melody in my head. I'm not trying to do anything modern. I'm just focusing on that purity.” For the most part it's a happy listen, but there are little oddities, and unexpected turns that suggest all is not rosey in his memory bank. “It lives in this weird nether area between really happy and really sad,” he says. “It's catchy on the surface but if you listen closely you'll hear depth. That's my hope.”

In college Anjos, created RAC as a business idea after finding demand as a remixer for the likes of Chemical Brothers and the Shins. He was written about on Pitchfork too. But at the time his focus was on college bands he played in, not electronic music. He created RAC to delegate the remix work to other remixers and meet demand. It didn't work though, because everyone wanted Anjos on the job. He moved to Portland after college to take advantage of the music scene flourishing in the Pacific North-west. Remixing was his way into bigger things. “Once I got my foot in the door and developed a reputation I truly felt compelled to do my own work,” he says. Coming up in the MySpace era, RAC had developed a solid reputation and a great book of contacts who sought to work with him as he became more experimental and curious about creating originals.

In the initial years, he had a dream list of collaborators, including bands and songwriters he grew up admiring. He'd write demos, send them out to his network, thinking he was going to enter the fray of 12-inch dance records. “I didn't give myself enough credit,” he recalls. “When I started writing, it wasn't coming out as dance at all but pop songs. I was like, 'Shit now what do I do?!'” As a touring in-demand DJ he had to figure it out. He developed his ideas naturally, finding vocalists to fit the pieces. Working with Kele Okereke from Bloc Party was a fantasy come true. Across his first two albums he also collaborated with Rostam Batmanglij (Vampire Weekend), K.flay and Rivers Cuomo (Weezer). He was finding his voice, even though he wasn't singing.

In the years since, he's worked on Linkin Park's final album, TV and film soundtracks, scored a ballet and remixed everyone from Lana del Rey to Odesza to Bob Marley. His songs have been streamed over half a billion times, he's won a Grammy and his live performances have taken him to festivals the world over. He feels at ease with his success, and in a place of liberation to do and make as he pleases. The process of 'BOY', however, has changed him in a way that will guide his next moves.

“I feel so much more attuned with who I am as a person,” he says. “I had blocked out that part of my life from memory. Through revisiting it I have experienced a self-discovery.” It's one he's still processing too but with his past now settled, he only has the future to look ahead to.